Tae Hea describes how startups can unlock growth (find "Go-To-Market Fit") and why that requires executives and founders to unlearn.

Surfing to Growth, with Tae Hea Nahm of Storm Ventures 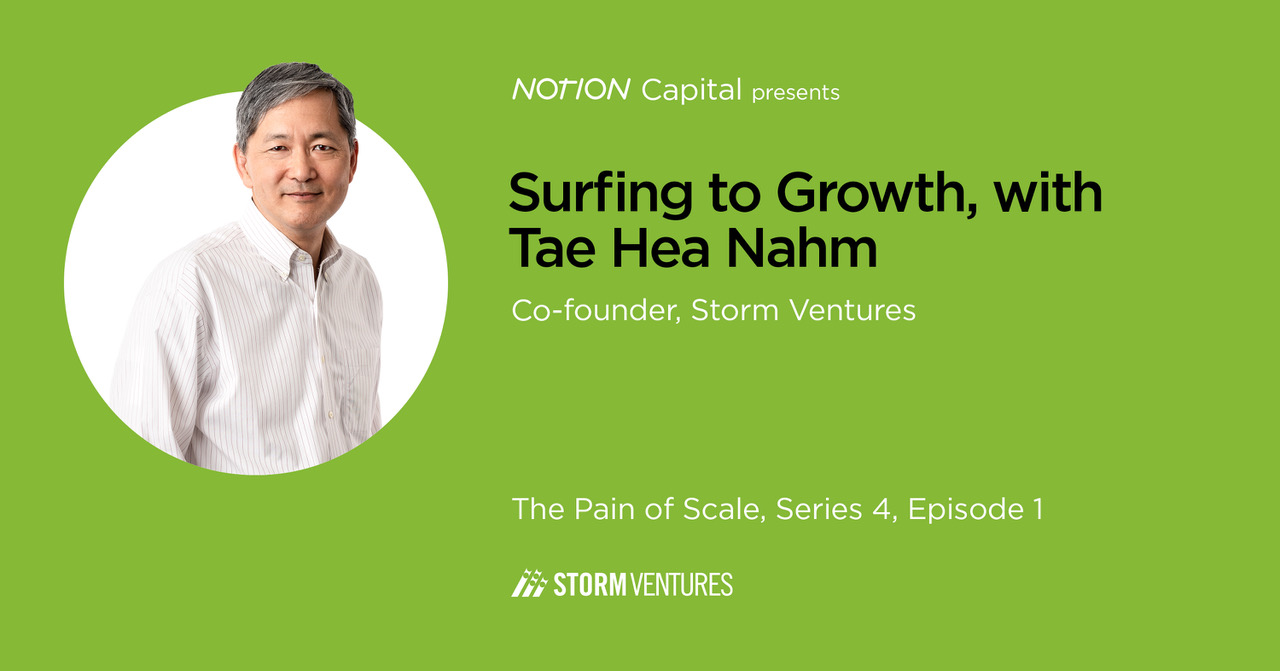 Tae Hea describes how startups can unlock growth (find "Go-To-Market Fit") and why that requires executives and founders to unlearn.

Tae Hea Nahm is the Managing Director and co-founder of Storm Ventures, investing in B2B SaaS companies in the US and Europe. Tae Hea is also the co author of Survival to Thrival, breaking down the B2B SaaS company building journey. This article is based on an interview that took place in 2019.

You can listen to the interview with Tae Hea in full here.

What inspired you to spend four years writing Survival to Thrival?

If I had known it would take over four years to write the book, I don’t think I would have started the journey. I don’t consider myself a natural writer. But the inspiration was simple. We really wanted to help new entrepreneurs, just as so many prior entrepreneurs have helped Bob Tinker (my co author) and myself. So we started down this path and the project just grew from there. We interviewed many other people and added their stories and we wanted the book to be practical, so we tested it with our portfolio companies and would get scathing feedback and went through many iterations. So ultimately, it took over four years and over 60 versions.

A bit like building a startup. Or maybe even harder it turns out!

What we found is that enterprise startups all follow a five step journey: 1) founding the company, 2) finding product market fit, 3) finding go to market fit, which unlocks growth, 4) accelerating to category leader because we're now in a winner take all world and then 5) transcending your category to become an industry leader.

To help entrepreneurs understand what GTM Fit feels like (especially those who have never experienced it), we came up with the surfing metaphor.  Basically, how do you go from paddling to surfing?

Ryan Floyd, one of my colleagues at Storm is a keen surfer. He tells me that to surf you have to do three things: Catch the wave; Ride the wave; make sure you are on the right surf board. It turns out that the same three-step process applies to B2B startups.

Finding the elusive growth formula: Surfing to Growth is a 3 step process

There are these big waves that as a startup, you need to surf, to become a unicorn or a category leader.  How do you surf the big wave?

First up is catch the wave. The way you catch a wave is to the paddle to the peak of the wave. And it is the same for a startup. The startup should paddle over to the peak of the wave, which we call the urgent pain. You know if you have the urgent pain, if you can answer the question, "why should the customer buy now"? Not buy three months from now, not six months from now, but now.  Finding that urgent pain allows you to catch the wave.

Then you need to ride the wave. And the key to riding the wave for a b2b startup is coming up with a repeatable go to market playbook. The go to market playbook is not for the CEO or the VP of sales, but is for the newest sales or marketing employee, so that they know exactly what they need to do in order to repeat and scale the GTM process. And the key element of this GTM playbook is identifying what we call “the wow”! The wow is not something that the board thinks is great or the CEO thinks is great. But the wow is something which drives the customer to the next stage of the customer journey. What I mean by that is, when you do the first demo, you show something, and the customer goes, “Wow, I really want to show it to my colleague”!  That sets up your second meeting. Or you show something and the customer says, “You know, I really want to try it”. That begins your trial. So identifying those specific things which trigger your customer to go to the next stage of the customer journey is “the wow”. In MobileIron’s case, the wow was the ability to do selective wipe. It was the simple ability to wipe corporate data from the smartphone, while leaving all the person's personal stuff, their photos and all that. So, Mobileiron, being able to demo selective wipe was something which really impressed the IT people because they were doing it manually. And then they would bring in their colleague and say, “Hey, look at this.  It's really cool”!  And that was their initial wow. So identifying the wow is the key to coming up with this repeatable playbook.

Then finally, the third part about picking the right surfboard is all personalizing the GTM model to make it work for you, i.e. riding the right surfboard.  So you have different personalised models whether sales-led, marketing-led, or product-led. In the beginning they go through a lot of steps manually, so it's very sales intensive. And then you start adding marketing, which is essentially automating part of the sales process and then also start introducing the product even earlier in the go to market process, with free trials or freemium.  At the end they figure out the optimal mix and a very personalized go to market model, which then becomes a competitive weapon.

Unlearning is critical to growth.

Unlearning is related to the dark side of growth. Every startup goes through this intense exercise of trying to figure out their growth formula, and then the startup finds it and is now accelerating. This is great. But growth is really hard on the people. It often results in founders or executives failing at the next level of the company.  The reason is that growth causes the job to be done to change. So if you're a VP of Sales with one rep, that's very different than a VP of Sales with 50 reps, which is also very different than a VP of Sales with 1000 reps. Growth causes these jobs to change even though the title and responsibilities are the same.

So how do the people change? The key to change is to unlearn. At the beginning of the journey, before you find go-to-market-fit the ideal profile of a VP of Sales is a pioneer, (like an American explorer called Davy Crockett). Someone who can find the path through the woods, who can succeed without a map, without all the provisions.  They find that path through the woods. As soon as you find that path. You want a warrior leader, someone like you know, William Wallace (played by Mel Gibson) in Braveheart, who hires other warriors and is very good at competing against the enemy.  Then when a company gets to 100 reps, you want a completely different type of VP of Sales, someone who's good at managing many warrior leaders, and a good example is Dwight Eisenhower in World War Two, where he commanded the Allied army on the Western Front. What is interesting about Eisenhower was he was never a warrior. He never fought in battle. So the VP of Sales has to unlearn and relearn many times over.

It’s hard to unlearn but people transcending to the next level is a huge accomplishment and a huge benefit for the company. For the book we interviewed sales people such as Mark Smith, who was VP of Sales or Rubric and Infoblox. Mark said he failed the first time round, but  succeeded the second and third. What he realised was that “unlearning” requires you to overcome insecurity because you're giving up what you're really good at, like being a great warrior, and doing something completely new. When you do that you become insecure. And so he had  to overcome that insecurity, to unlearn and transcend to the next level.

How can Founder CEOs unlearn and grow with the company?

It's hard for CEOs because they typically have less people to go and consult. The VP of Sales has the CEO and the other execs as peers.  But the CEO, if they talk about a lot of these kinds of struggles with their executive team, usually the executives leave! And then if they talk about it too much with the board, the board usually then replaces the CEO. So it turns out that for the CEO, this is a very lonely journey. And so part of what we're trying to do with the book is by explaining how that the problems that they're going through are not unusual, they are normal, and they're really not alone.

What surprised me most about writing this book were the differences between myself as a VC and board member and Bob as a Founder and CEO.

My biggest surprise was how long it took for my co-author and I to reconcile our views. Bob Tinker and I had worked together very closely on two startups for over 15 years. But as we were writing the book it felt as if for those 15 years we were watching two different movies!  And it turned out that it's because we were working on these startups from two perspectives.

Bob was the Founder CEO of Mobileiron and I was the VC and Chairman of the Board. And so our perspectives were different. Bob was the surfer -- trying to catch and ride the wave, trying not to wipe out. As the VC I was in a helicopter 50 feet above the water, not getting wet, not worried about wiping out. But I'm watching everything play out, seeing 15 or 20 surfers, and the waves coming and going. Reconciling our two perspectives took a few years.

We are good friends. Yeah. But even now when we do presentations, we have pretty big differences of opinion.

To learn more about Tae and Bob’s work you can go to survivaltothrival.com. Or you can find their book via Storm Ventures website and track Tae Hea Nahm down on Linkedin.