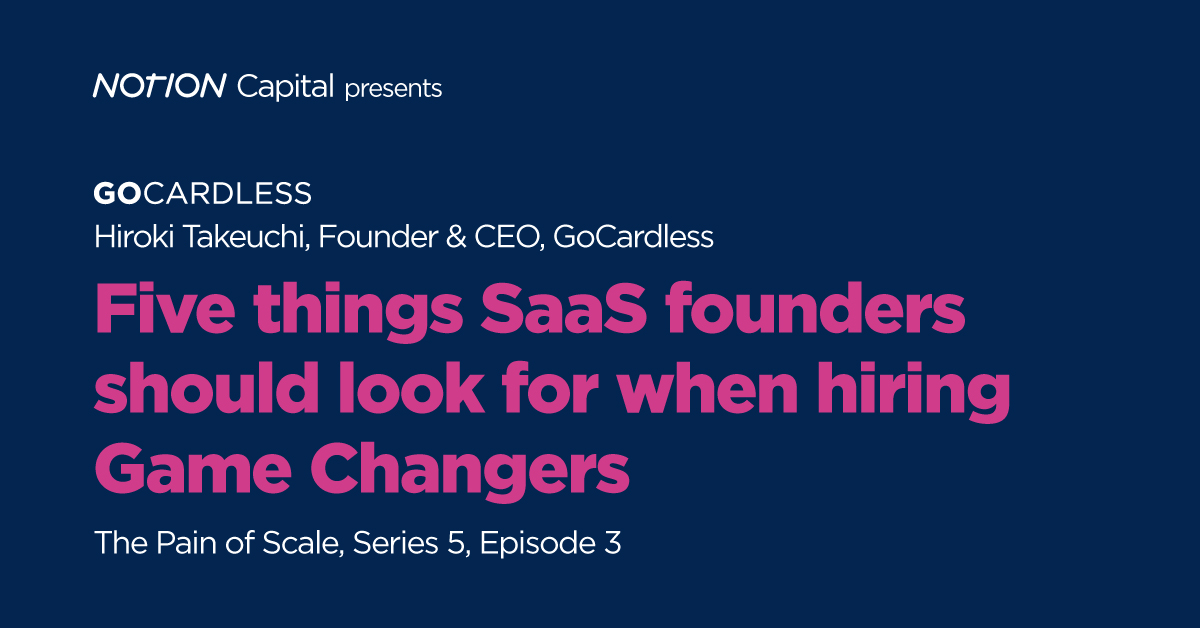 Many founders really embrace that and they have an uncanny ability to attract extraordinary people to join them on their journey and for some it becomes an addiction. In the Notion portfolio, there’s nobody who embodies this better than Hiroki Takeuchi, the founder and CEO of GoCardless. GoCardless processes billions in transactions every year and helps tens of thousands of companies around the world take recurring payments using a global direct debit infrastructure.

We’ve been really lucky to work with some fantastic people at various points in the journey. From the very earliest days I’ve always felt incredibly humbled they’ve even wanted to be part of the journey that we’ve been on!  We have hired people that helped us to achieve things that we never thought would be possible on our own. And so the nature of the Game Changers that we’ve hired has evolved over the years. And what you need at the different stages of the journey changes all the time. But what has been consistent is that the thing that has enabled us to get to where we are today has been thanks to hiring some really fantastically talented people along the way.

The flavour of what game changing looks like differs at different stages of the company. In the earliest stages, it’s about people that are 10X engineers or the people that are doing the actual work, and they can do that far better than anyone else around them. As you scale that changes. Those people are just as important as they ever have been, but you also need to start finding people that can lead the business, the executive talent that is focused on how to scale things, and build out teams that are able to deliver. And so the nature of Game Changers definitely evolves. I can think of multiple examples along the way, where we’ve hired Game Changers and seen a massive change in trajectory in the business as a result.

When you hire Game Changers, it should make you feel uncomfortable, they are that good. So much better than you.

Hiring these people makes me happy! But something I’ve noticed, when I hire this kind of talent, is that they make you feel uncomfortable, they are almost pushing you further than you think you can go yourself, or you even felt like you needed to. As a founder going through this journey for the first time, you need to get yourself to the next level to keep up. That’s the overarching feeling that I get whenever we’ve hired these sorts of people. There’s this sense that we’re taking this to the next level now. And this is something that I didn’t think I could do myself. But now I think we can and I need to learn, I need to improve. I need to meet this new bar that this person is coming and setting.

So you have to be comfortable feeling uncomfortable. All of the time.

Five things to look for when hiring a Game Changer.

GoCardless has 400 people now – October 2020 – and we’ll be scaling the team further in 2021. So the kind of talent that you’re looking for at the senior table is focused on that executive level talent, leaders that can build out large areas of the business. And there’s a number of things that I look for, that I’ve seen from the great executives that I’ve hired so far, that really make them stand out.

I’ve broken it down into five areas that I think about:

The first thing I think about is their framework. One of the common challenges that any kind of leader in a scale up faces is that you’re dealing with quite abstract problems that are evolving all of the time. And in order to be able to solve those kinds of problems, you need someone that can help everyone around them to break the problem down into digestible parts, and then solve each one. That requires a way of thinking which is more structured, a framework that helps simplify and then solve very abstract and complex problems.

The second thing I think about is how effective they will be at getting their function to perform. That obviously differs very much depending on the area of the business you’re talking about. Having a high functioning product development team is very different from having a high functioning sales team. But you need that kind of functional performance as a basic kind of building block for success.

This is obvious but really important. They must have the proven ability to build incredibly high performing teams themselves; attracting, developing and retaining great talent. They need to be good at finding people that are the best at what they do, just as I do, and oftentimes hiring people that are again better than them at what they are being hired to do.  That’s a common theme through all of this is, in order to be able to really scale something and be effective, you need to hire people that are much better than you at whatever it is that they’re doing. And so that team building element is super important.

And then the last two are the softer skills that I think about.

You’re trusting these people with large areas of your business, and you need to be able to trust their judgment and the decisions that they make.

The final one is their hunger. And when you’re in that kind of scale up mode, where you want to grow the business significantly, then it’s not just about the status quo and operating the machine, it’s about building and growing, and you need to have that kind of drive and hunger to never be satisfied and want to build something much bigger than you think is possible

This hunger is super key. Hunger is the biggest difference between the truly game changing people that I’ve worked with, and those more content with the status quo.  There’s a real hunger to the very best and dissatisfaction to where we are and always wanting to improve.

If you’re not constantly raising the bar, then you’re never going to build a stronger organization over time. It’s absolutely critical. And I think it goes back to that point about team building and being comfortable hiring people that are more experienced, more capable, smarter than you are. And if you don’t feel comfortable doing that, that’s when you start to lower the bar. And if you’re lowering the bar, then that is a slippery slope. And so it’s definitely really about feeling comfortable, and being ambitious in the people that you hire, being the very, very best at what they do, and far better than you at what they do. And not feeling threatened by that. But actually seeing that as a positive.

Diversity on the team and throughout the company is incredibly important.

This is something I’ve become increasingly focused on. And I’ve realized the importance of more as we’ve gone through this journey, and that’s just born out of experience. In the early days, we were a very homogenous group of people working on the business. We were all young guys who’d all gone to the same universities or worked in the same kind of companies. And we paid a price for that. We had a way of thinking and a lack of open mindedness to how we could solve problems, which was great, in some ways in the sense that we could make decisions very quickly. And we could do certain things very well. But there were also a lot of things that we didn’t do so well.

One of the ways in which I think we were very un-diverse in the beginning was that we were all inexperienced. None of us had any experience scaling businesses, and as a result we didn’t value experience. And I think that that cost us. We tried to reinvent the wheel too often. And as we brought in people with more experience from different walks of life, that’s something that we’ve definitely learned over time was actually, yes it’s important to reinvent the wheel in the core of your business. But you don’t need to reinvent everything that’s ever come before you to build something successful.

And if anything, trying to reinvent everything that’s come before you is probably going to slow you down. Is it really going to make a big difference to your customers, if you reinvent the way in which management principles work in your company? Probably not. And so it’s that kind of difference of perspective that we missed early on. And I think we are much stronger for it now.  It’s a really key part of what we look for, not just at the leadership level, but across the entire business is trying to encourage people from diverse backgrounds to feel comfortable doing the best work of their lives at the company.

It’s important to demonstrate a commitment to diversity

Think of it in really simple terms, which is when you’re hiring people into the team,  if I’m a potential candidate, do I want to come and work here? Obviously, if your team all look the same way, and you don’t, then that’s intimidating. We’ve definitely struggled with that at times.

When we first started out every engineer we hired was a young, white guy, so finding the first female engineer to come and join us is an intimidating ask for that candidate because they’re joining a team where they’re the only female on the team. We have to be very conscious through the journey, especially as we scale to avoid that kind of imbalance. And the longer and the bigger that you get with that kind of an imbalance, the harder it is to solve. And I think that that also applies to the leadership team as well. If you have a leadership team where everyone looks the same, then that’s sending a signal to the organization. Whether it’s conscious or not, people will interpret that. And so it doesn’t surprise me at all, that having more diversity at the leadership level enables you to build a more diverse team across the business. I think that is really important.

I look back on what I thought I knew,  two, three, four years ago – even one year ago – and “I think, wow, I really didn’t know a lot back then!” I’ve learned so much from the people I’ve hired.  I was surprised by how many people are out there that you can massively learn from and that  think of things in completely different ways from what you think is possible that can drive really very different results to what you would achieve on your own. And so that’s the opening of the mind that I’ve enjoyed through the journey so far. It’s not a surprise any more how much I have to learn.

My one piece of advice: don’t be intimidated by hiring extraordinarily talent people.

The main thing I’d say to any founder is, “don’t be intimidated by hiring people that feel like they’re going to do a much better job than you.”  I think there’s a tendency, and in hindsight, I definitely felt like we had this where you kind of think that hiring someone that’s more experienced or more capable than you is, in some ways, an admission of your own inability to do things. And yes, that’s true. But it’s not a problem. The benefit of the speed of learning and the impact they can have on the business is so much greater than that discomfort that you feel. I realise now it is a worthwhile trade.